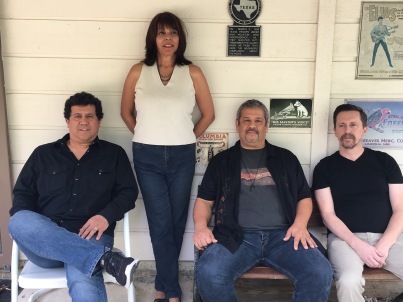 Slowly Grace  is a 5-piece band out of Austin, TX.  Fronted by singer/songwriter, Mari, the band lays down a timeless mix of genre-busting tunes that spotlights their strong sense of style, composition, and musicianship.  Anchored by a thunderous rhythm section, their hook-filled music is loaded with blistering guitar lines, and peppered with lush keyboard stabs that lay the foundation for Mari's soaring vocal stylings and soulful lyrics.

Their self-titled album, Slowly Grace, was released in December 2015 featuring music from across the musical spectrum. This is head-phone music. Their musicality and songwriting chops are evident from the first note; from straight ahead rock to psychedelic grooves to R&B infused funk this album delivers in spades.  Currently the band is working up new material for a second album to be recorded in the fall of 2017.  With a release date slated for January 2019. Slowly Grace is a band whose time has come.

Slowly Grace returns to the WXYZ Bar at the Aloft Hotel in San Antonio on Saturday November 16, 2019 for a live show. The show starts at 7pm with featured guests, Tales in the Tavern, with Slowly Grace starting at 8pm. $10 at the door.

Slowly Grace performs live at The Easy Tiger at the Linc. Show starts at noon and goes until 3pm.

Slowly Grace will perform live on Da Big Daddy G Show, Tuesday October 15, 2019.  The show is aired live and will be broadcast on cable channel 16.

Slowly Grace Live at The Hive

Slowly Grace hits the stage on July 27th at The Hive, South Austin's coolest new hangout for their Saturday Night Live Summer Concert Series. Come on out and see what all the buzz is about at The Hive.

Slowly Grace live at The Thicket

Slowly Grace will perform live at The Thicket on July 26th from 6p - 8p.

Slowly Grace will showcase their catalog of original music this summer at the Hive on June 12th and July 27th for their Saturday Night Live Concert Series. Show starts at 6PM, come see what all the buzz is about.

Slowly Grace is proud to announce their CD/Record Release Party at The Townsend on Saturday May 18th. Slowly Grace will be showcasing their 2nd studio album titled "It's Happening" with a 2 hr. set of original music.

Show starts at 10pm, tickets $8/Adv $10Door - 21 and over
https://www.thetownsendaustin.com/store/event/slowly-grace/

Slowly Grace will perform at the Carousel Lounge, one of Austin's most iconic Rock-n-Roll clubs, on Thursday April 25th from 9p - 12a.  They will be performing tunes from both the self-titled debut album and their newest release "It's Happening".  No Cover at the door, merch is avialable cash or charge.

Slowly Grace will tape a live performance on the Big Daddy G Show on April 23, 2019 airing at 10PM on Cable Channel 16 (Google Fiber, Grande Communications, Spectrum) and Cable Channel 99 (AT&T U-verse) Or Stream it LIVE through our website: www.dabigdaddyg.com/da-watch.html.

The show will start with an interview of all the band members followed by a 4-5 song set.

Slowly Grace proudly announces the release of their new album titled, It's Happening. The album was released on January 20, 2019 and is available on iTunes, Spotify and most streaming platforms. Recording sessions for the new album began in the Fall of 2017 at Parrot Tracks Studio in Austin, Texas. The album consists of 8 new songs written and arranged by the band covering the musical spectrum. This record puts on full display the bands growing songwriting maturity and musical prowess. It's Happening, available now, check it out.

Slowly Grace has been selected to play the Old Pecan St. Festival on May 6, 2018 on the Trinity Stage from 12 - 12:50.  This will be Slowly Grace's debut to the festival and the band is really excited to have been selected.  The band will be showcasing their new album due in June 2018.  Stay tuned for more news!

On Saturday May 6th, 2017, Slowly Grace was the headlining act for the 9th Annual SND Rocks Benefit concert at the Oasis Texas Brewery on Lake Travis in Austin TX. Over a 150 people were attended and the benefit garnered over $8,500 for the cause.

Slowly Grace makes their debut at the Sahara Lounge on February 19th opening for Cowboy Irie. Slowly Grace delivers their genre busting compostions with power and grace...tight arrangements, top-notch musicianship, and gorgeous vocals are the hallmark of this up and coming band. Slowly Grace is a must see concert. No cover, see you there.

Slowly Grace brings their live show to San Antonio, Tx at the W XYZ Bar at the Aloft Hotel 838 Northwest Loop 410 from 7pm - 9pm.  Slowly Grace delivers their genre busting compostions with power and grace...tight arrangements, top-notch musicianship, and gorgeous vocals are the hallmark of this up and coming band.  Slowly Grace is a must see concert. No cover, see you there.

Slowly Grace brings their genre busting show to San Antonio at Sancho's Laredo Night and Halloween Party. Slowly Grace takes the stage at 9:00 on the patio stage with special guests NP3 going on at 11 on the main stage. Bring your costumes and get ready to party all night long.

Slowly Grace is headlining Laredo Nite 3 at Kick Butt Coffee Music & Booze! Show kicksoff at 8:00 with The Rockville Blues Band followed by Cole Fried Fish at 9:30.  Slowly Grace will take the stage at 11:00. Slowly Grace delivers an eclectic blend of music touching on a variety of musical influences and styles with power and grace. A must see for anyone who calls themselves a music fan.

Slowly Grace performs live at the Carousel Lounge this Friday night, July 15th, 2016 from 7p - 9p. Two hours of original music blending rock/funk/blues with power and grace. $5 admission, must be 18 to attend. CD's available for $10. See you there!

Slowly Grace will play at the HOW Charity Golf Tournament Dinner at the Cimarron Hills Golf & Country Club on June 13, 2016. The event benefits Help Our Wounded (HOW) organization in support of seriously injured service members and their caregivers. The event kicks off on Sunday June 12 with dinner, an auction, and the music of Radney Foster. On Monday the golf tournament starts at 9am and ends with an after party featuring Slowly Grace from 1p - 3p. Go to www.helpourwounded.org for tickets and more details.

Slowly Grace members Mari and Bobby Solis are the featured guests on Tha1Radio interview on Monday May 30th at 12:00 to talk about the making of the CD and the future of the band. Stay tuned!

Slowly Grace will perform live at the SND Rocks Fundraiser to benefit the Special Needs Dept. of the Texas School for the Deaf.  Show starts at 5:00p, Slowly Grace will hit the stage at 7:00 for an hour long set of our tunes from our self-titled album.

Slowly Grace would like to welcome Victor Solis to the band. Victor will take over the role of drummer with the departure of Bob Murray. As a founding member who helped develop many of the songs on our debut record Victor's transtion back in to the band has been smooth and seamless.  We are looking forward to Victor driving the Slowly Grace engine.

Slowly Grace will be holding their Record Release Party on February 13, 2016 at The Clive Bar at 609 Davis St. in the Rainey Street District. Slowly Grace goes on at 10:00 with special guests Pachanga starting the show at 8:00. No cover.

Slowly Grace released their self-titled album on December 18, 2015. The album is available online at all major music streaming sites; iTunes, Spotify, BandCamp, Reverbnation, and Google Play to name a few. Hard disc CD's will be available at the shows. We are in the works to get the album available at local music stores. Stay tuned.

Slowly Grace completed the mastering of their self-titled album on October 18, 2015 at Parrot Tracks studio.

Caroling in the Caverns

no cover 21 and over

All ages welcome! No cover!

Slowly Grace live at the Carousel Lounge w/ Dreams of Nova at 10:00.